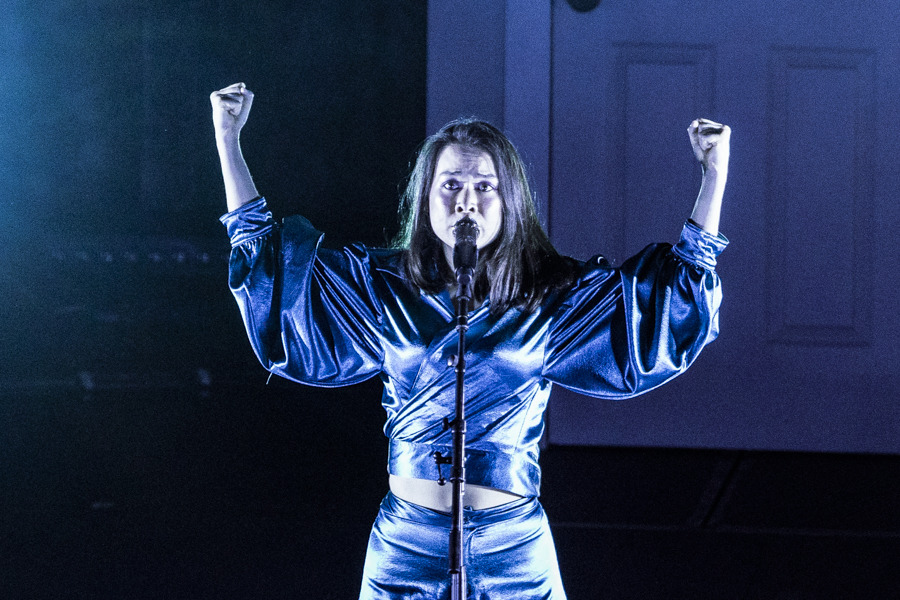 Mitski Miyawaki has been steadily navigating the waves of notoriety since gaining resonance beyond her early cult following. The Guardian dubbed her “the US’s best young songwriter” for frank lyrics that don’t shy away from raw emotions. She also earned buzz earlier this year for asking audiences coming to her concerts to not film “entire songs or whole sets.” Her Twitter post made a plea for being in a present, collective moment versus viewing it through a screen. After the past few years of increased screen time, that seems valid from someone who retreated from social media during the pandemic. She also became more private, having shared her past traumas as an Asian woman with the press, as well as her own very personal examination of her identity. As Mitski has ventured back out on tour in support of her latest release, Laurel Hell, she’s doing it on her own terms. And at a sold-out Radio City Music Hall on Friday night, fans rose to their feet to cheer her entrance to the stage.

Mitski opened with a pair from her latest, the ’80s pulsating “Love Me More” and “Working for the Knife,” accompanied by emphatic arm gestures. The screams reverberated throughout the hall all night, and the room burst into a collective sing-along early for “I Bet on Losing Dogs.” Clad in a satin, cerulean two-piece, the diminutive singer gave a contemporary dance performance along with managing the breath control to sing her songs without a panting note. Prancing across the stage, Mitiski paused in choice spotlighted sections to articulate statuesque poses. Appropriately, the headliner sang, “I steal a few breaths from the world for a minute” on “Me and My Husband,” from 2018’s Be the Cowboy. Midway through the set, she asked, “Does everyone feel sufficiently warmed up?” and got a rousing affirmative “Yes!” in response.

Continuing at this rapid pace, the back half of the set was filled with older fan favorites, “Townie” and “Your Best American Girl,” as well as the anthemic lead single from her latest, “The Only Heartbreaker.” To introduce oldie “Francis Forever,” the former New Yorker broke character to talk about her return to the past hometown where she’d written the song. Comparing the city to a toxic relationship, Mitski talked about the difficulties in living here, so she moved, but every time she comes back, endearing feelings do, too. Needless to say, New York City misses this former resident. As the end of the show neared, one of the night’s rare moments when the screams subsided, Mitski lulled everyone with “Two Slow Dancers” before exiting and then returning to the stage for an encore of “A Pearl.” Although she sang, “You’re growing tired of me,” that couldn’t be further from the truth. —Sharlene Chiu | @Shar0ck