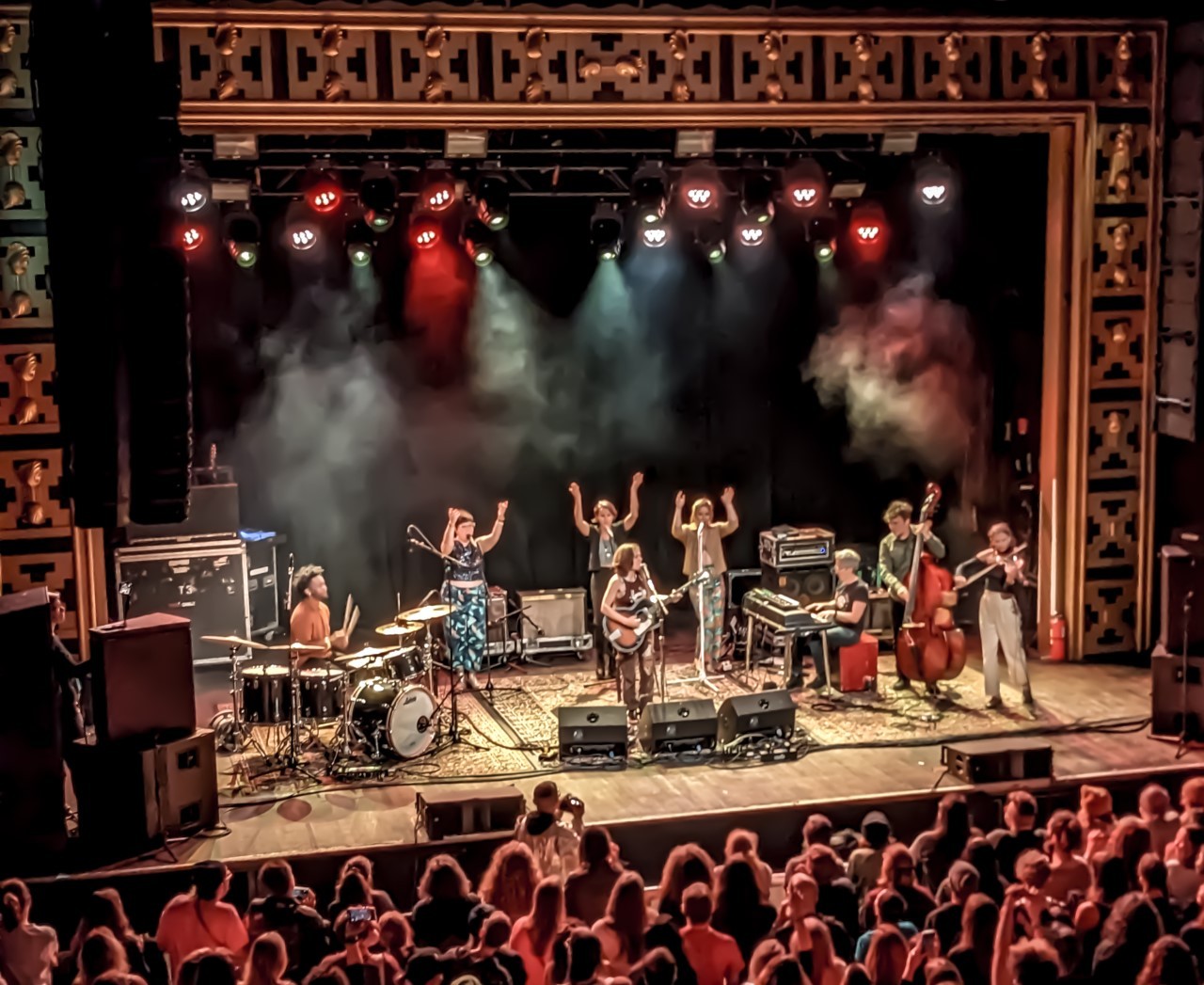 Ani DiFranco Has Everyone Singing Along at Webster Hall

Nearly three decades in, Ani DiFranco should probably be well into the grizzled-veteran phase of her career — she certainly has the battle scars to warrant it. Of course, with DiFranco, should be doesn’t really enter the conversation, and so she came through New York City on a Monday night quite the opposite of grizzled, appearing somewhere between lovable matriarch and wide-eyed, earnest up-and-comer. Her presence filled Webster Hall well before she even took the stage as the opening act performed their set. Dubbed the Righteous Babes Revue, the band consisted of artists on DiFranco’s label, Righteous Babe: Gracie and Rachel, Jocelyn Mackenzie and Holly Miranda. The group was imbued with DiFranco’s spirit, collaborating on one another’s songs, supporting one another with a not-just-label-mates mutual respect and delivering strong harmonies. Not to be overlooked, the room was already packed front to back for the early Monday evening opening set, a sign of DiFranco’s fans’ admiration, love and trust.

That love was overwhelming once DiFranco and her trio took the stage, an all-caps HUGE ovation welcoming her back to NYC. The set opened with “Still My Heart,” off 2014’s Allergic to Water, her longtime bassist, Todd Sickafoose, starting on electric piano, her new drummer, Jharis Yokley, creating a groove that dissociated into an almost free jazz when Sickafoose moved to the bass. The set list elicited one impassioned squeal after another from the adoring crowd. “Untouchable Face” was a full-throated sing-along, nearly everyone joining in as if they were teenagers back in their childhood bedrooms chanting, “And fuck you / For existing in the first place.” DiFranco subtly and not-so-subtly sneaked politics into the set. “Coming Up” was a slam-poetry jazz romp that ended with her declaring, “Good job, voters.” A newer song, “Baby Roe,” with DiFranco on tenor guitar, delved into the Roe v. Wade history from a personal point of view.

The serious subject matter couldn’t detract from the jubilant family energy in the room. Rachel Ruggles, from Gracie and Rachel, joined on violin for “Alrighty,” adding a dark mystery to the music, followed by Mackenzie bringing extra vocal oomph to “Simultaneously.” Still, the audience proved to be DiFranco’s best special guest. The crowd was pure joy singing along to “Napoleon,” the lyric “When you’re a big star / Will you miss the earth” resonating in the full room in more ways than one. She did a couple solo acoustic, or “folk style,” as she called it, sounding more like a fresh new signee to Righteous Babe and not its founder on the new “Spinning Room.”

As the set went on, the audience reaction increased in intensity, the lyrics to “Swan Dive,” including the line “Because I built my own empire / Out of car tires and chicken wire” perhaps getting the biggest cheers of the night. The final bits of the show featured another guest in Julie Wolf, who played accordion on “Angry Anymore” and then keys on highlight versions of “Revolutionary Love” and “Grey,” every member of the Righteous Babes Revue onstage with an uplifting bigger-is-better energy. The encore had all the women around a single microphone singing Woody Guthrie’s “All You Fascists Bound to Lose” like they meant it, and finally everyone onstage to end the show with “Overlap.” The closing message of “’Cause I know there is strength / In the differences between us / And I know there is comfort / Where we overlap” certainly intentional, exactly what a grizzled veteran like Ani DiFranco would want to convey. —A. Stein | @Neddyo